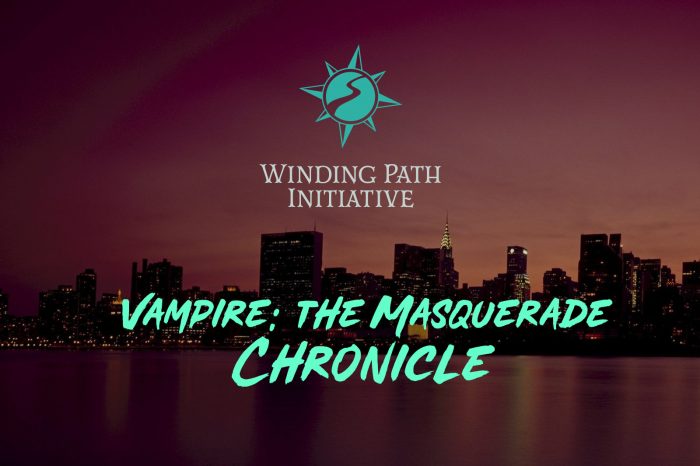 As part of our club’s mission to support and grow the Parlor Larp community, WPI has launched our Vampire the Masquerade Chronicle. July 2019 will be the start of historical games (allowing local games to establish their history), with the live chronicle starting in August.

This chronicle is managed by our Masquerade Chronicle Manager, Matt Blank, who is facilitating communication between chapter games, and management of NPCs and overarching chronicle setting. In WPI, your local game is the most important game. Our chronicle focus is giving your local storytellers the tools they need to run their best live game. We want to support them without getting in the way of them telling good stories, while providing players the chronicle structure they need to be able to travel with their characters and network with other players in the chronicle.

Our Masquerade chronicle will be one of several chronicles run by WPI, giving players and chapters the ability to participate in multiple games and genres, and grow their player base. Our Chronicles are designed for people who want to play a game, without the need for extra time spent not actually LARPing.

Masquerade in the WPI universe is a competitive LARP using the By Night Studios, Mind’s Eye Theatre – Vampire: the Masquerade setting and system, including the new Volume II Issue 1 Supplement. Our timeline has been advanced to 2019, to reflect the start of our chronicle. During the years since the original book has been released, the Anarchs and Sabbat have started a shadow war against the Camarilla, fighting them clandestinely all across Europe. In the Americas, all three Sects deny this war is happening.

See the WPI Masquerade Chronicle Guide for mechanical guidelines and character creation. For more information on chronicle structure and networking, see our WPI Masquerade Networking Guide. To discuss bringing a Larp group into our Masquerade chronicle, contact us.

Thank you for subscribing!